If you're looking for the next stop in the TOTL journey, this is it.

I was previously considering other estats iems like the VE Elysium or EE Odin, but decided to leap for the Traillii after reading numerous glowing reviews on MusicTeck and Head-Fi. The cost of Traillii is higher than the above mentioned competitors, but that can be attributed partly to the bundled PW 1960s (which is a ~2K cable by itself).

As a owner of numerous other popular iems (64 Audio A18s, Sony IER-Z1R etc.), the Traillii has become my personal favorite for all genres of music. The sound stage, separation, and fidelity are on a whole new scale. The Traillii's estat drivers remind me of the Fourte's extension, except they are extremely tonally accurate.

I currently use the Traillii whenever isolation is not a concern, as it is in universal form. That being said, I was pleasantly surprised at the comfortable fit that reminds me of a CIEM. For tips, I recommend the AZLA SednaEarfitLight as the oem tips included have bores that are on the smaller side.

I
Ian
A Heavenly Harmony

This is a rather belated, and brief review, to which I plan to expand upon in depth when life allows...

I purchased the Traillii about a month ago, with super quick delivery and excellent service from MusicTeck, as is always the case - thankyou guys!

I have had plenty of time to the enjoy the Traillii since purchase and can say very confidently it sits high above its peers. It is by far the safest recommendation I can make, but 'safe' certainly does not mean uninspiring...

It is quite simply the most musical, balanced and harmonious implentation of in-ear tech I've experienced. Oriolus has managed to tease out the best parts of the BA & EST drivers, seat them cohesively next to each other and tune them to perfection. The result is an effortless experience from top to bottom.

From ambient and acoustic moments to busy, synthetic bombast, to grand complex orchestral, the Traillii never breaks a sweat. It never becomes congested, with layering and imaging clearly decipherable and maintained even in the busiest of moments. All of this plays out on a stage that envelopes the head and reaches out beyond the ear. The tonality and timbre can do all genres justice.

Special mention has to be made to the two BA drivers responsible for the bass. They do one heck of a job. A fine balance has been achieved between the impact and tactility of a dynamic driver but with the control and swift nuance of a balanced armature. The bass is expressive, infusing the music across the stage, holding it up but never obscuring the higher frequencies. I have not heard a better quality bass.

I could go on and on, through the frequencies and the technicalities, and I plan to at some point in the future, but for now I will simply conclude this is the most complete in ear experience to date. If you have the money, there is no reason not to dive in with confidence!

Hands down best “all ‘rounder” I’ve ever heard. Sounds great out of just about every source. After getting this I sold my Focal Utopia and my 64 Audio Nio.

It’s amazing with every genre of music. Sound stage is huge, layering and separation are out of this world.

B
Bobby M.
Jack of all trades - master of all?

The Traillii is the one IEM I have heard that does virtually everything to an elite level. I feel it is best described as a balanced W shape tuning. The bass is the absolute best I have ever heard from BA drivers and outdoes most DD implementations. The bass response is sub bass oriented but there’s still a healthy mid bass thump to keep the sound bodied. The mid range has a linear rise from lower to upper which gives male vocals enough body and female vocals a more wetter and emotional presentation, similar to the Elysium. Treble is amongst the best I have heard. It has clarity for days, lovely texture and natural extension. The Traillii brings the most holographic soundstage I have experienced yet and it really makes the listening experience very immersive. It posses very high resolution and engagement while still keeping a tuning that isn’t boring. Overall, there is nothing to dislike about this IEM unless you didn’t want this signature. The main downfall with the Traillii is the stock cable can be microphonic if you do low level volume listening or a lot of movement.

I have heard or owned just about every TOTL you can get in the West including Erlkonig, A18s, U12t, Z1R and the newly released Mason FS, these are the best of the best. There may be IEMs out there that can do one specific thing better than Traillii, but IMO there are none that can do it all like the Traillii can.

If you are looking for one of the absolute best monitors on the market right now at any price, these should be on your radar. 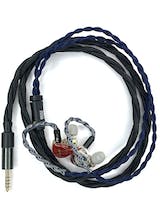 I recently got the Trailli, have the Empire Ears Odin, and have been comparing them as I get to know the Trailli.

I listen to a little bit of everything—pretty much anything with the exception of country—and I’ve been listening to a bit of everything as I’ve been putting Trailli through its paces. This has included classic rock (Rolling Stones, the Doors, Cream, The Who, The Band, etc.) Prog Rock (Pink Floyd, Rush), acoustic/singer-songwriter (Martin Sexton, Carole King), Electronic (Daft Punk, Prodigy, Crystal Method, Caravan Palace), dubstep, hip-hop, contemporary pop, electro swing, etc etc.

I would certainly say that as a whole the Trailli is better, but at least to my ears, we’re not talking night and day differences. However, the sum of the differences adds up to a overall improved sound in most areas. For me it’s enough to justify the substantial additional investment for the Trailli, but that’s an entirely personal opinion.

On technicalities (particularly resolution, micro and macro detail, soundstage depth) they are actually very close and there are some areas where the Odin reigns supreme. Odin’s tuning accentuates it’s clarity, detail, separation and precision through its emphasis on subbass over midbass, and upper mids over lower mids. The Trailli has more midbass and lower mids, which give notes additional body and adds a naturalness and additional warmth. It matches or exceeds the Odin’s detail and layering, but does so in a more effortless, less emphasized way. In fact, effortless excellence is a really good two-word description of the trailli.

To my ears, Odin edges Trailli out in its delivery that subwoofer-like thump subbass impact at the leading edge of a bass note—there’s a certain robustness there that the Trailli doesn’t quite match. I’m not talking about quantity, because Trailli actually has at least the same amount of subbass if not a little more, but the subtle quality of that leading edge of impact that the Odin’s dual weapon ix+ dynamic drivers offer that is really satisfying. However, Trailli is, somewhat shockingly, within whispering distance here—it really has a dynamic driver-like quality to its bass—and matches the Odin on bass texture and realistic decay, while also being a little tighter and faster. Trailli has noticeably more midbass quantity, impact, fullness, and texture, but does this without any bleed or bloat into the mids at all, which is quite the trick.

As I mentioned above, the Trailli is more balanced in terms of lower mids and upper mids, and the increased lower mids add more body, warmth, and organic naturalness. The Odin is comparatively more neutral, less bodied, with more of an upper mids emphasis that can occasionally add a subtle nasal-y quality in certain circumstances. The Trailli matches and perhaps exceeds Odin in terms of detail and I would say exceeds it in terms of texture in the mids, though some of this is less immediately apparent because the effortless presentation doesn’t emphasize these qualities as much.

Both have excellent treble, but the Odin is overall a little smoother. The Trailli’s treble really is something special with an edge in detail, texture, sparkle, and shimmer but, again, done in a very natural realistic way without overt emphasis. There’s no hint of sharpness or stridency, in either and Odin’s treble really is excellent—the best I had heard until Trailli, but Trailli edges out the Odin in subtle ways here that just sound a little bit more natural when going from one to the other.

On soundstage, both are again excellent, but the Trailli is noticeably wider and taller. They match each other with fantastic depth.

One dig against trailli is that the cable is pretty stiff, particularly when new and less comfortable than the stormbreaker cable on my odins; however, the trailli cable has become less stiff and more comfortable as I have used and gotten used to it, which was something that happened with my stormbreaker as well. Trailli cable is noticeably more microphonic, particularly when part of the cable rubs against itself or you move the chin slider, and again, more so than the Odin cable. These are purely ergonomic issues though.

The sum of everything makes the whole of the Trailli, to me, a noticeably better iem, but we’re in such a high echelon of performance here, that both are excellent—trailli just has an effortlessness and naturalness to its performance that is really compelling and astounding. It’s like the difference between two top professional athletes, one (the Odin) that works harder than anyone else and as a result has excellent, almost textbook technique, while the other is just insanely naturally gifted and has an innate effortlessness and almost perfect instinct (trailli).