The all-new peerless PAW S1, which inherits the same prestigious DAP architecture from the Lotoo PAW Lineup, aims to raise the bar again in the field of Portable USB DACs. Much more than a rocket in your pocket, the PAW S1 is the revolutionary game-changer that will ignite your Multi-Media Entertainment experience like never before!

Known for its top-of-the-line DAPs, Lotoo decided to add a DAC-Amp to its PAW Line-up to satisfy the needs of ultra-portable audio lovers. It goes way beyond the conventional boundaries of the performance a DAC is expected to have. At a fraction of a cost of its prestigious DAP siblings, what Lotoo introduces to the market is a pocket powerhouse built upon the same DNA as the rest of the PAW family line. The PAW S1 uses the same architecture Lotoo employs in its DAPs (namely PAW Gold Touch and PAW6000), so you can consider it to be an ultra-small DAP without storage.

Why isn’t the PAW S1 just another USB DAC?

Continue read:  10 Reasons Why the PAW S1 is a Truly Game-changing Technological Marvel

The S1 is a fantastic small and light portable unit. I wanted something that I could easily slide into my pocket that wasn't bulky and the S1 is perfect. The build quality is quite exceptional. Definitely premium feeling.

There is a small little screen on the side that shows the current bit rate, gain mode, volume and filter selected. The buttons make it really easy to switch between the settings. I know this will sound funny, but I like the buttons. They are small but they have just the right feel so it is easy to use them to maneuver through the menu. On the presets available, I felt there were plenty for me at around 16.

So far I have not experienced any issues of lag or any crackles. The background is very clean. The sound is fun listening to because there is a wonderful fullness to it. Also, there is definitely more power to the output than when not using it. I really think you will enjoy it should you decide to purchase.

On July 10, Lotoo released firmware version 1.0.0.7. You can go to Lotoo's website to find the latest updates. Holding down the FN button as you plug the S1 into your computer allows for a drive letter to map to the unit. Then drop the firmware in the root directory. Once you see successful on the small screen on the S1, you are set and can unplug the unit. 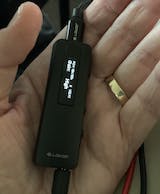 The Bad: A bit sharp with some tracks. In-ear click when changing albums or non-gapless tracks. Average soundstage

Impressions of the PAW S1
The Lotoo PAW S1 is the cutest little DAC/AMP. It’s so small it almost looks like a toy, but dang, it sounds nearly as good as some desktop sources dramatically more expensive and less portable.

It receives power and data from USB-C. The wattage provided by the USB connection does have an impact on the sound it produces - fed from mobile devices without lots of power, the sound is a little flatter with less detail.

When powered by a laptop or desktop offering at least a couple of watts, the sound the S1 produces is precise, clean, and detailed. I tend to prefer my sound a bit more on the warm/lush side, but something about the way the S1 presents a more technical sound engages me; it’s got a little excitement with just enough warmth there to keep it from being sterile. The sound profile is forward to my ears - nothing laid back here. The S1 features sharp attack - almost (but not quite) to a fault - leading to good transients and an excellent sense of dynamics.

Bass is well-represented and controlled with enough current to articulate dynamic drivers with authority. “Letters” from Yosi Horikawa’s Spaces album demonstrates impeccable presence with the right IEM, while not blooming over the crisp details in the midrange. Deep basslines found throughout Shpongle’s Museum of Consciousness have weight and presence. Radiohead’s “Ferel” from TKOL has an appropriate growl with the weight and impact the track deserves. Paired correctly, the S1 will be acceptable (but not god-tier) for bassheads, yet the transition from bass to the mids is coherent enough to delight those that are decidedly un-basshead-y.

The mids are very detailed on the S1. The presentation is on the clinical/dry side, but very nuanced. Vocals are naturally presented from the deepest vocal registers all the way through the most ethereal siren call. Brenda Boykin’s Chocolate and Chili album renders with her voice front and center. On albums like Radiohead’s Kid-A where the vocals are mixed a little further back, Thom Yorke’s singing emerges beautifully from the electro-rock soundscape enveloping his every strained word.

Treble is a touch brighter than I usually prefer. As mentioned above, it’s got some excitement and folks sensitive to treble may find it a bit more extended/emphasized than preferred. I’m generally treble sensitive and I quite enjoy the S1, but if you are sensitive, some of the EQ options (esp “dental”) would tame it further. On a few tracks with really hot mastering the treble can come across as slightly grainy, but on most tracks it just sounds crisp with details front and center.

The soundstage on the PAW S1 is not its strongest point, offering an average soundstage in terms of how far outside of my head it presents. This is counterbalanced by excellent imaging and layering. All that crispness in the detail helps separate each instrument out.

The PAW provides a set of pre-packaged EQ settings. I’m usually not much for DSP, so I didn’t spend a ton of time with these. The “none” setting is where I spent most of my time. The movies, near field and far field options also feel like they add bits of crossfeed which I do appreciate (although crossfeed with a few ms of delay would be even better). Picking one of the crossfeed EFX does help widen the soundstage a little. The “dental” EFX setting is horribly named, but does cut the treble down a few db and helps smooth out the presentation a bit on tracks where it is overwhelming.

The S1 has a soft click in the headphones when switching tracks/albums in some players. I believe this is when the audio stream stops and starts again. Not a problem for gapless playback.

Although the S1 has been plug and play pretty much across the board with laptops, desktops, and Android phones, it’s the first device I’ve found that isn’t 100% reliable with the Apple camera connection kit. It works with some USB-A to USB-C cables and adapters connected to the CCK (including the one that came in the box with the S1), but other cables that work with other DAC/AMPS and the CCK will power the S1, but not transfer audio from the iDevice.

R
R.A.
A Good and Well Made DAC/AMP

I think that the equalizer presets do not sound that good. The PAW S1 does sound better than a jack from a computer when the source is of decent quality. The PAW S1 seems to have better frequency separation and the sound is a bit more space or air. The build quality is also nice too. I primarily listen with the NVX XPT 100 (a clone of the Fischer FA-003, Brainwavz HM5, Yoga CD880, Jaycar Pro Monitor Headphones) headphones.

I used it with my Pixel 3a with Westone W30 IEMs and now listening with it on my Mac Mini to a Fosi HD-A1 amp driving some pacified AudioEngine A5. Not an expert, but I'm impressed.