I have many hi end emi's and top brands too. The traillii is the best! I used to tune pianos and have some hearing loss in my right ear. High frequencies. I was reluctant to do a review because of my hearing loss but Andrew at MusicTeck is a very fair and honest salesman. , and I feel indebted to him for his help and great service. I will try my best to review it.
The Traillii has a dimensional sound stage. The use of these in watching 5.1 surround sound blue rays is very astonishing. The movie "Pacific rim" for example,,has a part in a giant assembly plant where they build these giant robots. You can hear the enormous size of the building by the working sounds going on. The Trailli makes the movies come to life with sense of hearing sounds from different areas around you. Very impressive.
For music it's the same,,the instrumentation of each instrument is extremely clear and a distinct ,,with a definite area where each one is playing. I like good dixieland. The music is very happy and also very complex and hard to play. For me I can listen to music 3 ways. First is the melody ,then the color of the sound which is the tone of the instruments. The trombone has a big round clear sound with overtones not heard with other emi's. but heard on the Traillii. ,the third is the intonation.or accuracy of the pitch. The cable of the Traillii is the very best letting all the frequencies come through very clear. My lord it is just like sitting in the middle of an ensemble where you can point to each instrument while listing. The tone and color of the sound is extremely life like,,like no other iem I own. I used to play trombone professionally ..and I am used to being in small groups such as dixieland and also concert bands.
In conclusion,,The Trailli will not disappoint you. The cost is high but for the lifelike sound is truly amazing and worth the money. Also with the, great expert service from Andrew at Musicteck,well you can't go wrong.

I am very pleased with these. The sound is perfectly balanced, rich, full, precise, yet not sterile, with very rich sound-stage and very nice overall balance to the sound signature. I am not a rich dude, and I had to actually sell my motorcycle in order to find the funds to pay for these. But since I listen to music 8 hours per day on average...every single day of the week, I can say that they are in fact worth it. I stepped up from the MEST with a Leonidas 2 cable, which was really quite good, but these are in another league altogether. In addition, they are TINY. You forget you have them in, and because they are so tiny, they STAY in...all...day. The same cannot be said for my MEST : you always know you have them in, and after an hour or so, you need to keep re-adjusting them. No so with the Triallii. They are a joy to wear, and in fact, are 'thee' most comfortable IEM's I have ever tried. Someone here stated that they sounded better with the Leondas 2 cable so since I already own the Leonidas 2, I tried it, and I have to say I do not agree. The stock cable provides superior clarity, noticeably so. The cable included with these is quite robust, and quite expensive in itself. I use these with the Lotto Paw Gold Touch, and it is a perfect match. The Gold Touch instantly allows you to grab over a dozen different sound-signatures via the incredible approach to EQing dinstinct to Lotto...so on that 'odd' track where the sound engineering is poor or less than balanced, you can easily fix it with the Lotto. Something that cannot be said for Astell & Kern units where the approach to EQ is purely useless. If I had to assign a percentage as to how much better these are than my MEST with the Leonidas 2 cable, I would say maybe in the neighborhood of 30% better in all respects. As in, the Triallii has a much more halographic sound-stage, superior articulation, superior base, sub-base, treble, and mids...especially when you crank up the volume. The Triallii comes alive at medium to higher volume....all of a sudden they 'perk up' if given some volume. I listen to a wide range of genre, and I find that the Triallii shine regardless of musical genre, something which is usually not true for any higher end IEM. In addition, I now can hear stuff that I never knew was in the musical track : like Frank Sinatra snapping his fingers while recording 'Luck Be A Lady'. I had not known that he was snapping his fingers during the recording. So the Triallii is quite revealing. They are very clean too, very dark backround. Now here is where I am also quite impressed : Movie Soundtracks. Usually, film score music destroys IEM.'s, as film score music can often times be very demanding on an IEM due to the complexity of everything that is happening in film score music. But much to my joy, the Triallii secures utmost pristine clarity and distinct separation of all layers of the tracks for film...of which I have a very large collection. Obviously, these are very expensive. But IF---you truly know that the experience of music day in and day out is something you rely on, something you treasure, truly, in the utmost sense, then I would say do whatever you need to do : beg, borrow, steal...and get yourself the Triallii. Life is short.

Listening to Traillii exceeded my expectations. They do really sound holographic like the bigger cans.
Level of detail is crazy especially in highs, while bass and everything around is nowhere weak, muddy or overflowing.
It is the first IEM combo I don’t want to change anything in, including eartips.
Switching to SpinFits CP100 make sound more edgy and U-shape from which Traillii doesn’t benefit in my opinion.
As for AZLA SendaEarfitLight tips, well, they elevate the whole frequency range higher which is also not good to my ears.
So I would recommend to just plug them and enjoy the music!

To summarize - It’s a great product and I can easily imagine Traillii to become my final TOTL choice. 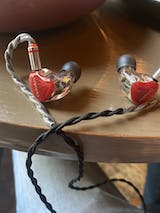 I posted a review on my initial impressions of the Traillii a while back, and wanted to to give you an update in relation to the cable. As mentioned previously, that PW cable that comes with the Traillii is custom tuned to bring out the best in the Bird. But it also brings out something that initially I found just irritating. Over time it put me off. I'm talking about the microphonics.
So I decided to cable roll and tried a couple other options. Eventually I settled on the Leo II.
This turns out to be a phenomenal(!) pairing. The sound is much clearer, almost like someone removed a veil which you didn't know was there. Everything is so crystal clear now. Paradoxically, it's also a tad warm. Coupled with the (even slightly more) expansive soundstage you're left wondering how that was accomplished.
The other benefit of the traditional Leo II is that it's a sleek, minimalist cable which is not super heavy.
The PW cable that originally comes with the Traillii is the 1960 4-wire, a cable which is twice as expensive as the Leo II. This comparison certainly is an example for the fact that more expensive is not necessarily better. In this particular case - and for my personal tastes - it's in fact the other way round.